Hit enter to search or ESC to close

It’s just past midnight. The dim glow of an iPhone is the only light in the room. A thumb swipes routinely swipes upward. After thirty seconds, the grid ends. “UNLOCK MORE GUYS.” Almost mechanically, the thumb taps the top of the screen and the process repeats. All the while, while the body operates free of cognition, there is a little voice screaming in my head: delete your fucking grindr.

Of the many things to be said of 2020, I find one sentiment universally relatable: this year has asked a lot of us. In battling both a global pandemic and systemic racial injustice, all of us have had to exert some additional labor, be it emotional or physical. This means that many of us are also trying to check-out when we can. A good book, a netflix binge, or a long yoga session can be a great opportunity for some solo escapism, but we sometimes need a little community, too. For many queer men and trans/non-binary folks, Grindr has long served such a purpose.

Grindr continues to urge users to stay home and stay safe, but in a remote world, it has done all it can to keep people connected. In addition to its being an online hub for gay networking, flirting, and dating, Grindr has added virtual events suich as drag shows and celebrity interviews. On its surface, it’s the perfect place for people to coalesce around a shared culture, feel safe, and maybe even share that quarantine booty pic. However, for many queer people of color (QPOC), Grindr all too often contributes to the alienatation from which we are trying to find shelter. The reason? Grindr dudes are really racist.

This is not a new phenomenon. Since its release in 2009, the app has ultimately been seen as a venue for men to advertise their sexual preferences in hopes of finding their Mr. Right Now. Almost immediately, these preferences were racialized or otherwise discriminatory. Depending on your location, sometimes more than half of user profiles will have a “wish list”, explicitly stating either an interest in or aversion to such categories as “fatties,” “femmes,” “Asians,” and “Blacks.” In fact, such preferencing and objectification is prevalent enough to have inspired the creation of a website to call out those who perpetuate it. ‘Douchebags of Grindr’ is a mural of profiles all displaying some sort of sexual discrimination (e.g. “Please be white”).

Remarkably, this fails to strike many people as problematic. One user, interviewed for a VICE article on sexual racism, perfectly sums up the plea to innocence of so many men on Grindr: “If someone actually cannot get turned on by someone from a minority group, that’s not really something they can change.” As if it were a factor as inconsequential as height or hair color, many people see racial preferencing as simply another component of someone’s “type.” However, height is not a line along which the systematic allocation of resources has been determined.

As Denton Callendar, a social scientist who studied the correlation between sexual racism and generalized racism, explains, “sexual racism is a form of racism because, quite simply, it is the use of racial stereotypes to include or exclude groups of people. The reality is that our desires—like all of our thoughts and behaviours—are as susceptible to broader social and political trends.” This means that your attraction, or lack thereof, to a particular race is not some innate preference, but a prejudiced learned over a lifetime of socialization.

This also means that the harm done to Grindr users of color is just as visceral as that which we experience from other racist interactions. In fact, between the intimacy of the setting and the vulnerability around human sexuality, oftentimes it can be sexual racism that is the most damning to a person of color’s psyche. And this doesn’t just mean negative racialized comments.

Positive racial preferencing, referred to as racial fetishization, is just as much an arm of sexual racism. Terms like jungle or yellow fever are thinly veiled attempts to reduce individuals down to racialized aspects of their appearance so that they can fulfil some sort of sexual fantasy. By fixating on a sex partners skin color or associate stereotypes, QPOC are being othered in a sexual way. There’s a pretty thick line between attraction and fetishization, and comments like “BBC” and “Sub Asian Bottom” usually indicate which side of that line you’re on (hint: it’s the racist side).

In this way, for QPOC, Grindr and similar queer social networking apps have become somewhat of a double edge sword. In a remote world, these apps present some of the only avenues for community, connection, and companionship. On the other hand, consistently dealing with sexual racism can leave us feeling smaller and more alienated than before.

Of course, acknowledging the problem is not enough. As the recent surge of organized resistance to racial inequality should make clear, change will only follow rigorous and collective accountability. In a recent twitter thread, Guardian and BBC News writer Alexander Leon offers a series of infographics about sexual racism, including what you can do to combat it. 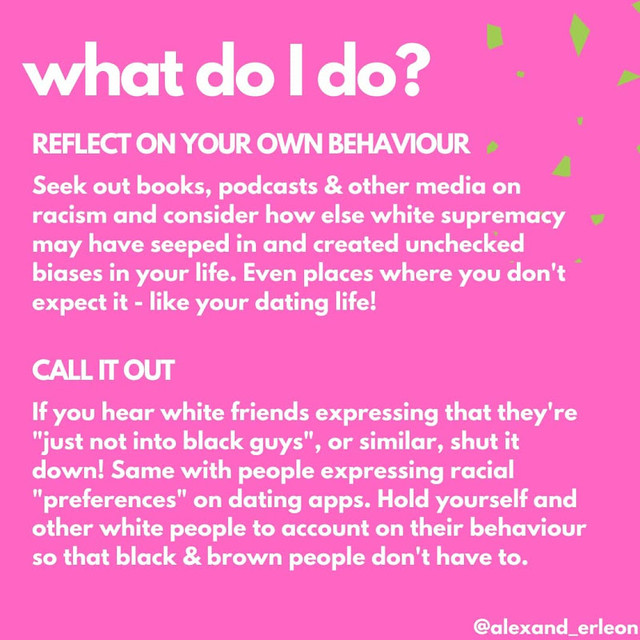 Still, it may be unrealistic to expect every Grindr user to change over night, so it’s about time Grindr and other social media companies treated sexual racism the same way that they do other forms of racism. To be fair, many of Grindr’s recent events and panels have been aimed at sparking dialogue about racial inequality. Yet that users are still permitted to publicly display their distaste for Black and brown sex partners should remind us that conversations can never replace accountability.

Follow us on social media to stay connected
with the Gen Z community.